One was up London a few weeks ago to see the Oceania exhibition at The Royal Academy of Arts. According to them the islands of Oceania comprise the squillions of islands scattered across the Pacific Ocean from north of Papua New Guinea right across to Easter Island. Geographically speaking they’re made up of Micronesia, Melanesia, Australasia and Polynesia. It says here.

The exhibition was vivid and fascinating. According to Johnny Scientist, these islands are not separated by ocean, they are connected by ocean. Your Polynesian was such a good sailor that he didn’t see the sea as a barrier but as a means of transport. Understanding this changes everything. Communities that are hundreds of miles apart on land are quite isolated but when you can just jump in your boat and sail to the next community then these islands become nodes of a transit network. Like tube stations. Kirbati become Baker Street. Tokelau becomes Oxford Circus and Easter Island becomes Upminster – everyone knows it’s the end of the line but nobody goes their unless they fall asleep after a night out in Tokelau. And like the tube, if you stay on too long you just get off at the next stop. Indeed the islanders made maps using sticks which showed the “tram lines” between them.

Having done some sailing I can see this. Having never been adrift in the Pacific I am not so sure. It’s gorgeous stuff at any rate and according to the RA explains how the cultures of the island interweave with each other producing fantastic boats, sculpture and fabric designs. Once again this is evidence that our pre-agricultural revolution/hunter gatherer ancestors were not as daft as they’re made out. Don’t bother trying to visit. The exhibition closed on the 10th December 2018. 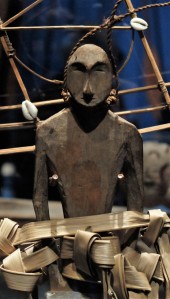