Don’t mention the population Fawlty! – I mentioned it once but I think I got away with it. There was a good article in the Guardian today about how we’re killing off all the other animals on Earth. Being the trendy Guardian it only mentioned population in passing and mostly banged on about other countries with more exotic animals but the decimation of animal habitat is happening in England too.

The FT ran an article last weekend about how the River Bean in Hertfordshire is running dry and “river levels have dwindled across the whole south-east” partly through dry weather but exacerbated by bore holes bringing up water to slosh down the throats of millions of humans.

Nobody talks about population! It’s bloody odd. These days every other person is a fucking project manager or a business analyst and they are all banging on about the “5 Whys”, “root cause” or “critical paths” yet nobody talking about population! They’ll quite happily replace their lightbulbs with LEDs and hate Donald Trump for questioning climate change but wont connect it with the decimation of wildlife habitat to grow crops or build new houses. 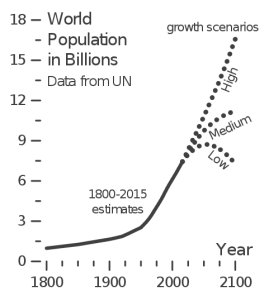 Like some fucking powerpoint presentation for middle managers we’re supposed to content ourselves that the Medium scenario is some kind of reasonable middle way. Bollocks it is! The Medium scenario is up nearly 60% on todays population! And that low scenario; you think that’s good news? Of course not. That low scenario represents a future where peace and prosperity are replaced by war, famine and decease.