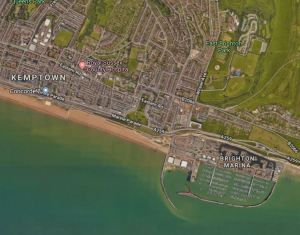 A couple of weeks ago I attended Vegfest at the Brighton Centre. Good food and great conversation. The Brighton Centre does a lot of this sort of thing and people come from miles around to hear music, watch sporting events and attend conferences.

No doubt every Liberal Democrat forced to attend does so willingly but come on! The real reason they come is for a couple of days in Brighton. The draw of the Brighton Centre is its location: Just down from the station and bang on the sea front in the middle of town. After a dreary morning listening to Nick Clegg drone on about referenda you can nip out for a few pints and a spliff, then sneak back in to let the ranting of Vince Cable just wash over you. When they let you out you can saunter back to one of numerous hotels for a nap and hit the town early. Sounds ideal.

Well, how about this? How about we demolish the conference centre and adjacent cinema and extend Churchill Square shopping centre? Then build a new conference centre in Blackrock? That’s what Warren Morgan, council leader and chair of the nebulous “Policy, Resources & Growth Committee” wants to do and he plans to sign it off next month according to the Brighton Argus.

Yes, yes I know, they will build access to the marina and a bus will run every 10 minutes and blah blah blah……But come on!! We all know what it will be like. I have attended numerous events at the Marina and they’re all very well but straying outside one feels like a character from the Truman Show. Someone has built the Marina to fool us that we’re in town – but we’re not and we know it. Yes, there’s a restaurant, a pub and a petrol station but something’s wrong………. we can’t quite put our finger on it and then, straying just a little too far from the fluorescent lights, we reach, what seems to be, the edge of the universe. We stand and stare in awe at the fathomless distance between ourselves and the glittering lights of Brighton.

The Brighton Centre wheeze is part of the Warterfront Project to “regenerate” Black Rock and Maderia Terraces. – “Regeneration” – That sounds good, ay? A bit like Doctor Who? A brief collapse and then we come back younger and stronger with a sex change. Very Brighton. What’s not to like?

But “regeneration” is just another bit of newspeak. It means “corporate building”. Listening to Mr. Morgan’s pitch we find it riddled with corporate newspeak. A deal with Standard Life, millions of pounds of government funding, “World Class”. Mr. Morgan wants Brighton to be at the “top table for conference and entertainment venues across Britain.”

What will Brightonians get out of that?

The capacity of the old Brighton centre is 5,000, the new one will be 10,000. What will it mean for the residents of Kemp Town to have 10,000 people coming in from out of town.  Over three miles from Brighton station it adds at least half an hour for rail passengers. People will be encouraged to come by car. What will that mean for Marine Parade and Madeira Drive? Since getting traffic in, out and across Brighton has always been a problem traffic will come in from the Rottingdean. Has anybody told the residents of Whipping Post Lane to expect gridlock?

Mr. Morgan may not be a bad bloke. We Brightonians like to think that we’re green but, like the rest of the UK, we’re mugs. Suckers for propaganda. “World Class”, “Growth”, “Regeneration”, “Thought Leadership”, The legacy of New Labour’s branding of Britain. I doubt the political vocabulary has ever been so closely aligned with the global corporate agenda. We lap it up. Dangle Madeira Terrace regeneration in front of us and watch all the celebs jump on the bandwagon. All with the unspoken understanding that nothing can be done unless it includes lots of extra corporate retail space. After decades of Thatcherism and Blairism we have been indoctrinated to think that more and bigger is always better and to prize material goods over environment and people.

We need to start thinking about what sort of Brighton we want. More buildings mean more people and more traffic and more ecological damage. The current focus on global climate change, though worthwhile, distracts us from the bleeding obvious local ecological damage that is a direct contributor to increased CO2 emissions. Yet we’re blind to it. We cop out. Give us a Facebook post on a big simple issue like plastic and we’ll repost but massive nature busting projects glide past without comment. This creeping corporatisation erodes our individuality and is anathema to the spirit of Brighton.

It’s true that, over time, as new new restaurants and bars are built at Black Rock, stray conference revelers may not feel so absolutely isolated from the rest of Brighton but the feel of the area wont be Brighton. It will be like Heathrow Airport or The Newport Centre in New Jersey or Westfield in San Diego. It will be “World Class” and that means corporate.

Recently I met one of the council whallas who worked on the “redevelopment” of Jubilee Street. He said that the impetus behind the work had been that the small idiosyncratic shops that we all love had outgrown the North Laines and needed more space. Yeh right. That’s what they told him but, while the Jubilee library is fantastic, we shouldn’t kid ourselves. We bought the library by giving up central Brighton real estate to the likes of Tesco and Pizza hut.

You can Email Mr. Morgan here.

Plans for the Waterfront project can be found here

With all the palaver about Facebook and Cambridge Analytica in the media I found myself wondering exactly what had been done that was so wrong. Sure they collected data on millions of Facebook users and used this to target the users with adverts but this is what Facebook does. We all know this. The thing that seems to have made the difference, this time, is that there was some kind of security “breach” and the data may have been used to encourage people to vote for Trump.

I had a hunt around and found most of the press more interested in the politics and people than the facts of what actually happened. However, an article in Wired covers the facts so I’ll precise it here and throw in my own interpretation.

Like many “platform” providers Facebook provide normal access for Joe Public and a second “interface” for developers usually known as an Application Programming Interface (API). One example of this use is when you see a poll on Facebook. You answer the questions and the info is channeled back to the organisation which developed the poll. It’s worth noting here that many other companies besides Facebook do this too. I am continually irritated by iPhone apps which demands to know my location and read my contact list even though this is irrelevant for their function (I usually decline).

In November 2013 Aleksandr Kogan, a psychology professor at the University of Cambridge, applied for an API account on Facebook explaining that he wanted access to Facebook’s data for research. Kogan then created a personality quiz and collected responses from 270,000 Americans. Back then the Facebook API was very open and by agreeing to take part in the quiz users also gave access to many of their Facebook friends’ “likes” and interests as well. Kogan ended up obtaining information for roughly 87 million people at the last count!

About 5 months after Kogan obtained this data Facebook tightened up security so that developers could not see information on friends however, this was not finalised for about a year and Kogan already had the data anyway. Kogan then sold the data to Cambridge Analytica in violation of his agreement with Facebook.

In 2015 The Guardian newspaper published a story saying that American Republican politician Ted Cruz used Facebook to get information on users but this story didn’t get a lot of attention. However Facebook reacted by obtaining written assertions that the data had been deleted from the Director of Research at Cambridge Analytica, Christopher Wylie and Aleksandr Kogan. It seems that these assertions were false and that the data had been used in PR campaigns by Cambridge Analytica.

So, what are we to make of this?

It seems to me that it was Kogan who broke the law by selling the data to Cambridge Analytica and thereby violating his agreement with Facebook. But wait! Aren’t companies which subscribe to the Facebook API allowed to use the data to target messages? Surely this is the point of it? Perhaps Facebook don’t allow companies to resell the data but in that case Cambridge Analytica could have set up the access themselves. It’s all a bit vague. Facebook are also to blame for security which was so lax in the first place and for allowing their data to pass to Kogan so freely without any checks on his work – Those multi page agreements one assents to when signing up to a site are absurdly inadequate and, in my view, should not be acceptable in a court of law.

Cambridge Analytica, Wylie and Kogan are also responsible as they appear to have lied about the data being deleted. Wylie claims that he was under pressure from more senior Cambridge Analytica figures but he was a Director himself and so it’s unrealistic for him not to accept responsibility.

If we’re fair we should remember that when all this whiz bang digital media emerged few of us foresaw the downside. We raved about the opportunities and a new PR and marketing companies were formed to to take advantage of Facebook and other digital media.

The laws of personal data have not kept pace with technology and it is only in 2018 that the first law which really seeks to place a legislative framework around personal data comes into law (GDPR). I know of many organisations which are nowhere near ready and will remain non-compliant for some time to come.

We should also consider this in a broader context. The general tendency is to become apoplectic over data privacy but in the past this was just not an issue. I recall when the scandal broke about journalists dialing into people’s mobile phone answer service to replay their messages. Yes, it was immoral but up until then I doubt anyone would have considered it criminal. It is only now that we understand how information technology can be abused that our morals and laws are changing.

Democracies have evolved various mechanisms to keep the public informed. In the 19th century we had newspapers, in the 20th century television. In the 21st century it looked as though digital media would allow us to bypass the powerful and distribute information freely. The reality is now dawning. Just as the rich and the powerful fought for control of newspapers and television they are now fighting to control digital media.