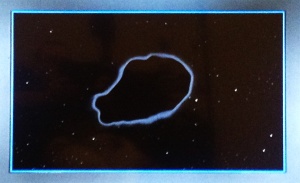 I’ve been messing around with data visualisation again after attending a Meetup in Brighton. Many years ago I experimented with graphics on old minicomputers and Tektronix graphics terminals. Then sometime in the late 80s bought an Amiga 4000 and some 3D rendering software named Imagine and built clunky 3D environments. I never really took it anywhere. There really wasn’t the time between the corporate day job and getting pissed. A dissolute but lucrative period of time I guess.

I signed up to Meetup.com a few years ago and recently it suggested a Data Visualisation meetup which takes place in The Skiff in Brighton. So I went along.

It’s extremely good! The first one I attended last year sometime, was about techniques for representing data in a fairly business like way as far as I remember. The second was a more artistic affair demonstratng generative art used in the comercial space. It had some fantastic video. The presenter’s name was Mike Brondbjerg and his web site is well worth a look.

Brondbjerg mentioned some software I’ve already used named Processing plus a sort of port of Processing to Java called Java P5. I walked away inspired and, as I left, I chatted to another guy who said that a MOOC named Kadenze was running a free tutorial on Java P5. So I signed up.

Tuesday night I attended the Meetup again and this time there was a guy named Berl Steiner demonstrating some software he’d written to visualise large datasets, not so much to dig out specific detail, but to gain an overall feel for the data and help spot outliers. It was excellent and the audience had many ideas for how it could be used. One guy suggested engineering data and I thought perhaps IT Security where specialist security systems and logging system which produce oodles of data which is often hard to assimilate. Another application which sprung to mind was Management Consultants and Auditors. These two roles entail specialist personnel who need to quickly gain an understanding of the finances of companies without prior knowledge. Steiner’s software might help them enormously and could be a good adjunct to data anlaytics software such as Idea or ACL.

I have to admit my progress through the Kadenza course has been slow. Christmas sort of got in the way. I have produced some micky mouse results but I can see the potential. I hope to get going on it again in the near future and have in mind interfacing it to a Raspberry Pi and use real world input to modulate the visuals.

2 thoughts on “Data Visualisation Meetups at The Skiff, Brighton”