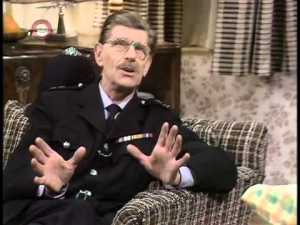 Rang the local bobbies yesterday. Had ideas of mature, constable at front desk in the manner of Derek Guyler. Thought I’d ask his opinion on keeping a bike on the street. After pressing 1 for this and 2 for that I reached a humanoid. Asked her my question and she told me to ring my local council parking department. She wasn’t even in Brighton. I said I was interested in the likelihood of theft and she directed me to the statistics for my area on the web.

I am starting to understand why any reasonable person is bound to eventually become a Victor Meldrew. The disparity between what we’ve got used to and what the world has become leaves us constantly dissatisfied. The only alternative is to become one of those cheerful but mad old grandpas who pick up random modern fashions like hoodies and are good with kids but wear luminous trainers. Neither result is attractive.

Later I was up The Smoke again. All this “progress” is pissing me off! Massive queue for the human ticket operatives at Brighton station. This is due to automation. Make the public sort out their own bloody tickets. Bollocks to them. So I tried to use a machine. These are positioned perfectly to catch the morning sun and at waist level to ensure wheel chair access. So I’m stooped over this damn machine as it asks me a lot of impertinent questions. I try to use my discount rail card and the price shoots up from £16 to £42. Eventually I get on the bloody train and the toilet is one of these Tardis affairs. Two button: D and L. D for door I assume and the button glows red when the door shuts behind me but the L for Lock doesn’t glow at all. Is that normal? Bollocks to them. Just write D & L on the buttons, who cares. Then the challenge of washing my hands. Should I press the soap button in hope that the water is actually working today? I never know how to get the water working so I just stamp my feet and wave my hands around and something I do makes water flow. Then at Clapham junction there are about 20 platforms and I’m not going to a terminus so I don’t know which train to catch. Is there an efficient station manager in a smart uniform waiting to answer my enquiry? There is not.

All this efficiency and process re-engineering generates more profit and makes things cheaper so that more people can travel and more people can have fancy holidays and cars etc. This was true of the agricultural revolution too. In a book entitled “Sapiens: A Brief History of Humankind” Professor Yuval Noah Harari argues that the agricultural revolution allowed production of greater  quantities of food which allowed greater numbers of people to survive but they survived in worse circumstances as the surplus was creamed off by the elite. This is happening again with the current technological/globalisation revolution. Efficiency now dictates that humans are deliberately eliminated to cut cost.

In the 80s there used to be a law, derived from the European Union I believe, which insisted that wholesalers could not also sell retail. For beer, this meant that the breweries should not own the pubs. To protect the vested interest (the breweries) a fudge was agreed in the UK where tied pubs were obliged to sell “guest” ales from other breweries. All this seems to have been swept away as independent companies now seem to own the pubs.

It’s becoming accepted wisdom that the current wave of technology is not creating jobs as the industrial revolution did. Instead even jobs like doctors and lawyers are succumbing to automation. Perhaps it would be good to have another EU directive that all this efficiency, automation and process re-engineering can be used in production & wholesale but not in retail. Use technology to make the factories and bank clearing systems and air traffic control systems work better but the (non-Internet) retail experience should be left to people?  Bring back police front desks staffed by aged constables. Bring back ticket counters staffed by people and bring back Victorian urinals the size of coffins.