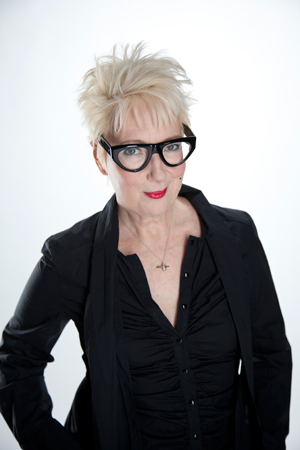 Arriving in Shoreham just before 7pm, I drove around looking for what I expected would be a crusty nautical themed building. I stopped and asked a couple who pointed to the modern block of flats towering over me with RopeTackle written down the side. Ah, it’s there is it.

Inside Ms. Eclair was being introduced and when she came on her style was buoyant, irreverent and self deprecating. One feels as if one knows her from her TV and radio appearances. Her colourful speech, embellished with the odd “fuck”, “ball bag” and “Perimenopause” gave the middle class, middle aged, middle Englanders a thrill that had one woman tittering most of the way through. Which is as it should be because, though this demographic is the butt of her humour, it is also where her empathy and humanity seem to lie.

During her introduction Ms. Eclair joked about how she had been discarded from the cast of Loose Women and she seems genuinely to regret this as she used to  get a free breakfast at the ITV canteen and could be home by 2pm.

Ms. Eclair  then read excerpts from the book. On the face of it there is not much to it. A woman living in London gets called back home to the North to attend her mother who has had an accident. However her prose is peppered with cynical, witty observations about middle classed life and “Women of a certain age” and various asides leads me to think that this is not just a humours book. The story deals with a crisis which any of us might face and the structure has  two narrators, one of whom is unconscious. The last time I heard of anyone attempting this was a novel by Phillip K. Dick entitled Ubik.

After the reading Ms. Eclair took questions which set her off on excellent tangents such as revealing that every time she fills her car with petrol she can’t believe they are letting her do this!

Her new book is named Life, Death & Vanilla Slices and as is published by Sphere.