On Friday night I saw The Comedy of Errors at The Roundhouse on Chalk Farm Road. Arriving 5 minutes late an apparatchik, branded in Roundhouse clothing, advised that we were not to enter until there was a loud noise and this was schedule at minute nine. It seems that RSC actors are especially sensitive to interruption. Odd, you’d think that if you’re employing professionals, they could cope with slight distractions. You wouldn’t want to distract a raw amateur as it could throw him but you’d think the RSC could cope with a minor movements amongst the audience.

At minute nine, we entered and took our seats. The gist of the play is the story is of a man, Antipholus, and his servant, Dromio, who arrive in a town where each has a twin unknown to them. Each twin also has the same name. The rest of the play is series of incidents in which one of the characters interacts with the wrong twin and confusion ensues.

This was a straight comedy and director Amir Nizar Zuabi played it as such with moments of pure slapstick. The set was 20th century industrial consisting of steel drums and packing crates along with the inside of a dining room which was lowered into position along with the actors as required. The occasional interruption of the fun by sinister figures with guns and musical instruments failed to lend production any menace if this were its intent.

I’m no Shakespeare aficionado and have had trouble keeping up with the lingo in other productions but I found The Comedy of Errors to be very accessible. Perhaps I did not keep up as well as I might have as I did think that the play began to drag as yet another misunderstanding arose when two unmatched twins met.

After receiving gifts in the street from unknown strangers Antipholus begins thinking this to be a very good place to stay but after numerous misunderstandings Antipholus and Dromio settle on the idea that the place is infested with evil sprits and the inhabitants mad. They seek to board the first ship home. The play ran for about two hours with an intermission.

We’d bought the tickets some last year as the RSC sell out months in advance. However, many seats were empty and I’m told that this is because the play had bad reviews so the connoisseurs didn’t bother using their tickets. Pity they didn’t put them on ebay then isn’t it.

In my purely amateur viewpoint I thought it would make a good play to see if you were just beginning to get into Shakespeare. 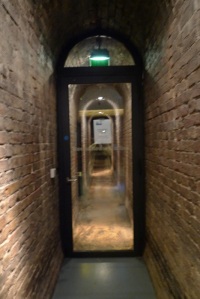 another brick in the wall

The Roundhouse is a Grade 2 listed building that was previously a railway engine shed containing a large turntable. I last visited in 1976 to see Van Der Graf Generator. In those artistes were a little less pompous and I recall a member of the audience yelling out to Peter Hamil: “Where’s your blue strat Pete?” And Hamil replying that some gangster in Italy had got it. A reference to the theft of Hamil’s guitar during a recent Italian tour.

I remember wandering around in the mirk under the brick arches and finding a girl assembling glowing necklaces by filling transparent plastic tubes with green gunk which she had got all over her hands. Meanwhile my friend discussed the purchase of nefarious substances with another gentleman.

Today The Roundhouse has been renovated. The term renovate has a unique meaning these days. It means to gut a building, make good the original infrastructure and then install an internal skeleton of steel and glass. Stairs, walkways, banisters and counters are installed until one might almost think one were still at work.

This infrastructure allows 21st century mankind to enter the original space without the tiresome need to experience anything. A small area under the arches has been kitted out with suspended ceilings, spotlight, polished floor and wooden counters and this was now used as the front office for some kind of commercial studio. Behind glass doors the original brick aches could be seen running deeper into he buildings but only Artists were deemed sufficiently talented enough to enter here.

Outside an enormous new building has been bolted to the side of the roundhouse. A veritable service module providing 21st century life support systems such as £2 bottles of water. 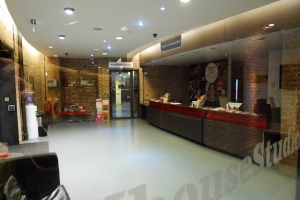 Time and again I see how beautiful old buildings have been turned into themed venues based upon their pre-renovated existence. Their reincarnation allows very little perception of the original because of the corporate nonsense that has been fused with the original. The resultant synthesis had none of the atmosphere of the original round house and resembled my corporate office in Surrey more than it does an arts venue.

We should recall that when these buildings were created they existed standalone. They did not need chrome lifts and glass frontage and there is no reason why they need this now. Correction: There is only one reason that they need this now and that is profit. The owners insert the 21st century intrastructrue in order to maximise the throughput of “consumers” at £30 a pop.

More than thirty years ago I visited The Roundhouse. I sat on the floor and watched a bunch of blokes cavort around on stage to the sound of guitars, drums and saxophones. I experienced the industrial nature of the building directly. Yesterday I sat on a seating unit inserted like a surgical implant into the soul of The Roundhouse and experienced the building like a deep sea diver. Which is to say vaguely, through a small window in the contraption in which I was encased. Mind you, thirty years on I am bloody glad I didn’t have to sit on the floor and so, in reality, I am a just curmudgeonly old hypocrite.