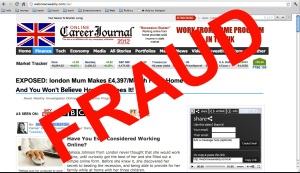 As a blogger I often receive spam encouraging me to make money from my writing and “Work From Home”. A nice idea and, if I am to believe this stuff, then I could be making about £40,000 a month merely by giving my personal details to a bunch of sharks on The Internet.

I am amazed that these guys bother attempting such obvious scams but I guess they must get some takers. I have a couple of advantages that allow me to see through these web site scams: First I’ve worked in IT for years and secondly I am a cynic.

So, for the less web literate and the more trusting, I thought it might help here if I outlined some of the factors that identify such sites as obvious scams. I’ll pick the last one I came across to use as an example. The site seems to be entitled “ONLINE Career Journal” but the URL is webnewsweekly.com/uk/.

The layout of the site is reminiscent of a newspaper and the title suggests that it is some kind of online “journal” with a smattering of adverts and what appears to be an article written by an independent reporter on a system to make money online.

The first thing to remember is to trust NOTHING you see on The Internet. Any page on the Internet can be made to look like anything, The fact that this one looks like a journal means that someone has chosen to make it look like a journal not that it is a journal. Ignore claims such as “as seen on SKY TV, The Daily Telegraph, BBC”. These may be reputable organisations but anyone could write such claims. They mean NOTHING.

And that’s another suspicious thing. The site claims that “Comments have been closed due to spam” . Could be. On the other hand closing the article for comments prevents anyone who gets scammed from commenting on the fact.

Now let’s check out the links. The web site above appears to have twelve tabs for other content. The article is in the Finance tab but there are also tabs for “Tech”, “Economy”, “Media” and so on. If we click one of these tabs we are taken to another site named http://www.24hourcashconnection.com and this is the whole point of ONLINE Career Journal. To take us to 24hourcashconnetion and get us to fill in our personal details. If we try clicking on any of the links on webnewsweekly.com/uk/ and we are taken to the details collection form. There is NO other content.

So what happens if we fill in the form. Well first it requires personal data such as email address, address and phone number. If we fill in all the details then we are taken to another screen with a count down timer set at 5 minutes. We have five minutes to enter our credit card details. This is high pressure selling!

At this stage we known absolutely nothing about the product or service being sold other than the suggestion that it will allow us to make money online and that we have by some freak chance caught the offer with just five minutes to go.

The cost is only $1.95 but the blurb states that if we were to give them our credit card details then we would be charged $1.95 USD for 5 days access to their web site. After this “trial enrolment” expires we would be charged $29.95 per month for “hosting and maintenance”. It is claimed that we may cancel at any time by calling a toll free number (0808) 234-3469.

I dialled this in the UK and it was an illegal number. I dialled it in the U.S. and reached a recording machine which gave no identification and merely asked me to leave a message.

Let us assume that we have given them our personal data and credit card details. They are now taking money from our cards every month. So what have they given you? As I’m not willing to enter my credit card details I can’t say for certain but I think we can infer that they will give you access to some lame web site with lame hints on making money online. Hints and tips that can be found anywhere. e.g. Check your facts, check your spelling. That kind of stuff.

All we have is a telephone number in the United States which nobody answers.

Who? Well I dug those details on Ms. Rivero out of Wikipedia but the point about Wikipedia is that anyone can update it. Perhaps she is real and this is a real video on home-working but it’s very general and no mention is made of this web site.

Well the site has market tracker information. Does it? Maybe they’re just random numbers appearing there or maybe they do plumb into a financial feed service. Who cares. Any web site can do either of those things.

Now let’s look under the bonnet (hood if your American). Web pages are constructed in a computer “language” known as HTML. This is a series of “statements” which instruct our web browser to show information in various ways. Most browsers allow us to view this “source” HTML in it’s raw format. Different web browsers allow this in different ways. Here are two:

It is beyond the scope of this article to teach HTML but if this were a legitimate site the comments by users could not be encoded in HTML. The comments would have to be stored and dug out as necessary.

If we view the source for webnewsweekly.com/uk/ we can see that the comments from supposed customers are “hard coded” meaning they were created by the web page author when the page itself was created not by web users later on. We can also see the date on the comments are derived from a variable named Now1string which is set to always be equal to today’s date minus one day.

The page is a scam. Don’t be drawn in by this rubbish.

To recap, here are some of the things which make this page suspicious.

P.S. – Whoever runs this scam also runs other web sites which are more or less the same but with different names.

These are a few I’ve noticed: