Read more on this in The Guardian 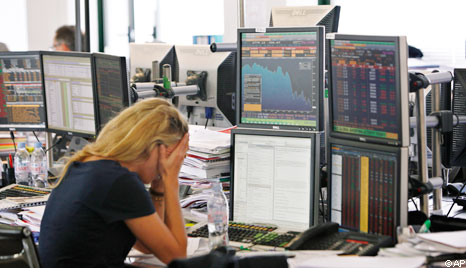 is this any way to manage your pension money?

In 1983, at the age of  24, I started working for an investment bank in The City of London. In those days I thought I disagreed with capitalism. Even as the banking industry swirled around me I thought that for every winner there was a loser. I now have more time for capitalism. I no longer believe that investment of spare funds by people trying to save for retirement is wrong or likely to deprive someone else of value. Indeed I can see now how capitalism is merely the free allocation of funds in a free society and that it is a more efficient way of allocating funds than some bureaucrat in Whitehall.

If I have a few thousand pounds saved which I want to invest for retirement it is acceptable to lend that money to an entrepreneur who has a plan to form a company to provide goods or a service which will make a profit. If, after a few years, I consider that my investment has grown sufficiently and I can’t see the guy making much more money or if I see that another guy has a better chance of making money then it is legitimate for me to sell my stake in the first company and buy into the second.

These are fairly standard arguments and, if one believes in freedom of the individual and of individuals to act together as groups, then they are difficult to disagree with. A whole industry has grown up to facilitate these transactions along with information services to allow me to analyse various economic and financial information.

Yes, much of the money washing around the system does belong to pension funds holding capital on behalf of rich and poor alike. From rich bankers to grieving widows.

But not all who take part in the market are equal. The people who run the companies providing the financial transactions and related services realised that they were making a lot of money and that they could make even more money by ploughing their profits back into the system and trading on their own account.

Further, an article  in the Financial Times on June 7th reported that big institutional traders “are winning preferential access to deals because computers used by exchanges are programmed to accept bigger orders first when matching prices”.

So we have a market where the small invester in my initial example is at a considerable disdavantage to large pension funds and banks and as the large organisations may jump in and out of a stock several times within a day we have to ask: Is this investment or gambling?

Another fault that I see in the system is the frenzied nature of professional dealers. In 1986 a wave of deregulation swept through The City in a process known as “Big Bang”. Prior to this trading took place using a process known as open-outcry where traders use hand signals to transfer information. There was a lot of shouting and yelling and things were pretty frenetic. The process is still used by the London Metal Exchange but, after Big Bang, the London Stock Exchange replaced open-outcry by rows of traders sitting at computer screens. Technology went berserk and computers now regularly buy and sell automatically. Volumes have increased and the pace is now extraordinary. A trader will have numerous computer screens displaying graphs and figures and they will need to assimilate this information quickly and then make decisions involving huge amounts of money.

Is this any way to invest the funds you are saving for retirement?

Should the various banks be spending your pension money on the most expensive real estate in England? Should they be using your money to build luxurious head offices? Should they be rigging the pay scales of their traders to encourage them to engage in undue risk? Should they be trading in an atmosphere of hysteria?

So what’s to be done? Ban something? Many would argue that you cannot restrict such activity without restricting our fundamental freedoms. They argue that, yes, there are outrageous abuses and failings of the system but that, overall, the system functions better than any other system yet devised. As with the saying about democracy, that it is “the least worst” of all the systems of government.

I read an article recently on the risk assessment process undertaken for nuclear power stations and I recall discussing risk management with an ex-colleague who now works in the oil industry managing the movement of supertankers around the world. In both nuclear power and oil transportation the impact of a failure can be catastrophic and risk management is tasked with analysing and controlling these risks.

It seems to me that the risk management strategies in use by banks and financial institutions are mere fig leaves when compared with the very real risk management which takes place in other industries.

The British government are now making plans to require banks to ring fence their retail banking divisions keeping them at arms length from more risky investment banking. The United States had a similar law known as Glass Steagall requiring separation of high street banking and investment banking. The law was enacted to control speculation following the 1929 Wall Street Crash. However, as the American economy recovered various parts of the law were repealed until the whole thing was dismantled in 1999.

Let’s hope that the British have leaned from the American experience and that the ring fencing legislation currently being discussed will remain in force in bad times and in good.

This is an amazing video of a guy named Seikou Yamaoka using just his fingers to “paint” on an iPod touch using a app named ArtStudio. 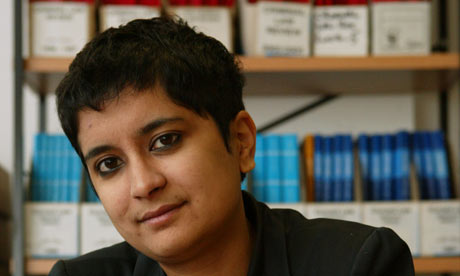 I have long admired Shami Chakrabati. Mainly because of her determined, intelligent and reasoned support for human rights but also because she’s short, dark and gorgeous. So when I heard her speak on Any Questions on Friday I felt my opinions were being well represented. Even on the subject of the NHS, where she admitted was a layman, she made some good points.

Then Simon Jenkins, chairman of the National Trust, said that he thought that health services in the world which appeared to work best are those where the county council pays but delivery is handled by private companies and he highlighted Scandinavia as exponents of this style of health care. Ms. Chakrabati then had a hissy fit and derided the idea that “rare cancers” and “heart surgery” should be handed by “parish councils”. Amazing! Ms. Chakrabati, of whom I expect intelligent and honest debate, had drifted off into the tactics of New Labour and was deriding an argument that had not been made.

In a democracy it is right that there is debate over ownership of industry and public services but what I find objectionable about “the left” is their automatic assumption that they have the moral high ground. They don’t. It is perfectly moral to argue that private companies are, overall, more competent than large state run organisations. Any debate should be over technical aspects such as quality of delivery and costs.

I am old enough to remember the monolithic nationalised industries which were the norm in the 60s and 70s and I well recall their arrogant disregard for their customers. I dislike the hyper-commercialism of the 21st century but would not welcome a return to the days when public services were run for the benefit of their workers and British Leyland thought that innovation meant square steering wheels.

The lesson here is that, while Ms. Chakrabati is an absolute heroine on the topic of human rights, we should resist the urge to idealise her. Idealising leaders must be some kind of natural human drive as we tend to do it quite a lot. These days pop stars seem to gain most from this phenomena though why we should consider that singers are any more intelligent or moral than the rest of us I don’t know. I remember seeing Madonna in a documentary and was gob smacked by the shallow drivel which she spouted. (Telling her father she couldn’t tone down her act because it would be “….compromising my artistic integrity….” – Yeh, OK, just zip yourself up and sing your song ay love!.)

Like many people I was impressed by Barack Obama when he became president. His speeches seem moral and reasoned. However, one of his first acts, on gaining office, was to address the American Israel Public Affairs Committee (AIPAC) and declare that Jerusalem should remain the undivided capital of Israel handing the Israelis a victory and betraying the Palestinians without even understanding what he had done. One might also wonder why the President thought his first action should be to address AIPAC at all. To be fair to him I think this was probably an honest mistake on his part but it does show once again that our leaders have feet of clay.

Men are not Gods and should not be worshiped. Some opinions of some leaders will concur with our own, but many will not. 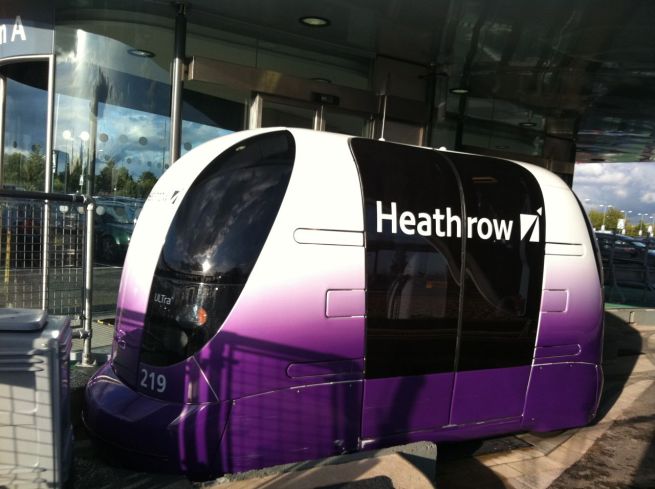 The Pod at Heathrow

Up at Heathrow airdrome early this week and, after parking the ground car, I looked around for transportation to terminal 5. No bus but what appeared to be a fairground ride. This turned out to be “The Pod”. Some kind of personal rapid transit system known as ULTra (Urban Light Transit). These days I am a cynical old curmudgeon but I have to say that I was impressed. I used a touch screen outside the car to select my destination and the doors opened to reveal a something which was half dodgen and half roller coaster car. I think it would take 4 very comfortably but you could get six in it easily. You couldn’t stand up but you could put your bags in the middle.

Well made and with leather seats it ran very quietly. What fun! Looking at this youtube vid it appears that the thing is not on rails. Guided by bloody computers I expect. As I left the car park I saw other little pods pootling by in the other direction. A little like that scene on mars out of Blade Runner.

So it seems that the future has arrived. It is here at Heathrow.

Of course when I returned the next day I found a sign by the lifts telling me that the Pod was not running and I should use the bus at stand 22. At stand 22 there was a sign saying that I should use the pod. Hey ho. That’s Britain for you. We are quite capable of creating wonders of science but we can’t be arsed to make sure they work properly. 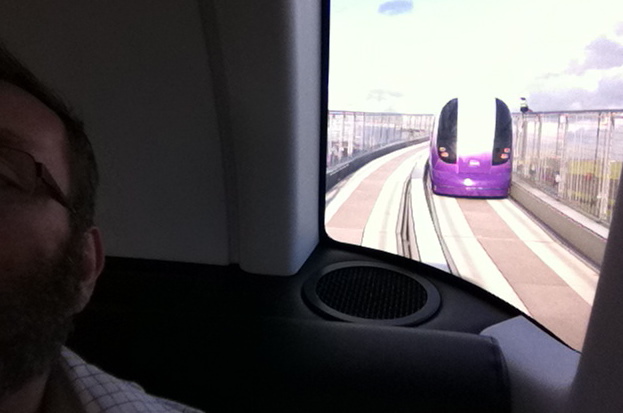 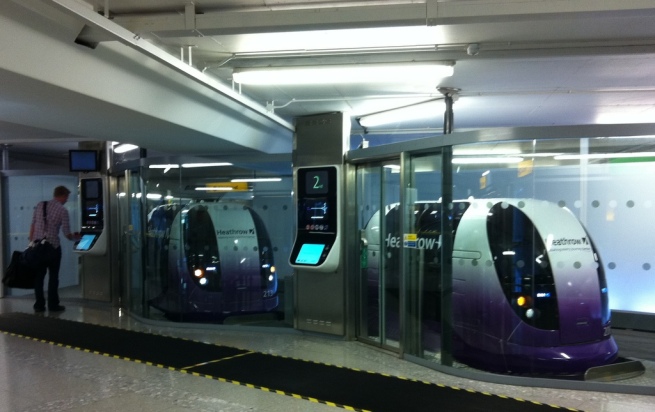