On Monday I received a new iPhone 4. A year or so ago I had bought a Macbook Pro and was impressed despite a handful of gripes. I’ve owned a Nokia N95 for a while and this is a good phone but I felt it was time to update. I read a few reviews and watched a few Youtube comparisons and all the modern smart phones seem very good. I did not want to spend my life comparing technical data and so, having a Macbook, the obvious choice was an iPhone 4. I thought this way I’d avoid any connectivity and interoperability issues……..

My initial impression on the iPhone was negative. After switching on it insisted on being connected to a Mac and immediately demanded my credit card details. Presumably in case I ever buy anything from iTunes. I have to say that I find this grossly invasive! I had not intended to buy anything much and I am one of the generation who grew up with vinyl and CDs and so my music consists of digitised albums, scanned CDs and downloads from Amazing Radio.

However, what’s done is done, so I synched the phone and started looking around. Weirdly the much vaunted iTunes is not the music player on the iPhone. Instead it seems to be a shop window for Apple to flog me stuff. One has to find the iPod icon to play the music which has been transferred from my macbook.

The iPhone 4 is, of course, a great phone and I am impressed but one glaring failure is that the phone will not sync with my macbook through blue tooth or Wifi. This is pathetic. Despite the Bluetooth interface on the macbook referring to smart phones when I try to pair my Apple iPhone 4 with my Apple Macbook Pro I am told that the macbook “is not supported”. What utter bollocks!

I now own a device with the specific purpose of mobile communication. It has three separate methods of wireless communications (3G, Wifi and Bluetooth). Yet the only way of synching it is to plug in a cable! Hello Apple, this is 2011 not 1995.

Further investigation revealed that a Wifi syncing app had been created but rejected by Apple and so could now only be used on Jailbroke iPhones.

I was also a bit miffed to discover that there is no obvious way of transferring general files from the Macbook to the iPhone. The iTunes application on the Mac allows transfer of music, movies, photos etc but not other files such as PDFs or Word processor docs and the iPhone storage does not appear in the Finder so you can’t simply drag and drop files across.

Another issue is the ring tones. On my Nokia I could select a track from my music collection as a ring tone or I could create a sound file myself. With the iPhone there are presets or you can “buy” a ringtone from iTunes. There’s that word again “buy”.

It’s odd that Apple users used to consider themselves as innovative free thinkers and contrasted themselves with the monolithic big business drones that used Microsoft. After a bit of hunting around in the Apple forums I found discussions going back to 2007 on Bluetooth synching including the arrogant posts by people who appeared to have no imagination and slavishly followed the Apple line even when this ran contrary to obvious user preferences. This used to be the territory of Microsoft not Apple.

The iPhone’s lack of basic functionality and the fact that Apple are so greedy that the very first thing that they need me to do is register my credit card details and then try to charge for piffling ring tones give me a very poor impression. It is interesting that Google Suggest reports the top three phrases starting with “Apple are” to be:

I have never been a great fan of Microsoft but feel that, perhaps now that Microsoft are starting to lose their grip, they may be becoming a bit more cooperative. Apple on the other hand appear to have caught the Microsoft disease and think they will rule the world. 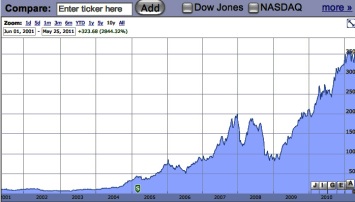 The share price for Apple continues to rise but if one looks at the chart one sees a steep rise as Apple introduced music players, smart phones and tablets. But having established the market and set the bar the competition is now replicating their products and I suggest that when you reach the top there is only one way to go. I just wish I’d bought some Apple shares as now must be the time to sell.

Am I being over critical? I think not. I have not bought a product from some minority Korean company. I have bought a top of the range product from the acclaimed industry leader. A company that is now valued at more than Microsoft.

So, for the moment I have an Apple Macbook Pro and an Apple iPhone 4 and, with some reservations, I am generally satisfied with them.

But I am now aware that buying Apple does not mean easy interoperability or cutting edge functionality. With Windows 7, Microsoft appear to have refined the user interface and there are some very nice Android and Windows phones out there. When I come to replace my Apple kit I will be very wary of Apple. Perhaps Apple’s image of innovation is now no more than a useful brand image used by their marketing department to sell to people who are more interested in “style” than substance?