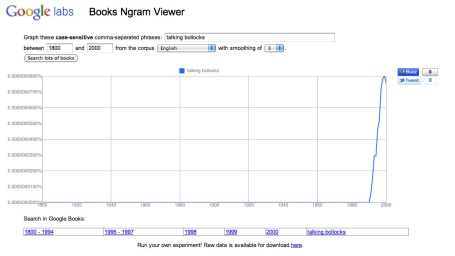 I’ve known for a while that Google have been digitizing books. Good plan. Hopefully by the time the decade is out they will have digitized the whole of reality. If they do then one hopes that they can contain the whole of creation in a smaller space than it currently takes otherwise the question arises: Where will they put it.

But I digress. The Economist informs me that Google have started analysing the digitized books and collating the derived data. This is an amazing idea. This means that we can now perform statistical anayslsys on massive quantities of text. We can analyze what ideas and subjects people were engaged with throughout recent history. One upshot is Ngram Viewer which allows us to plot a graph of the occurrence of a word or phrase in all the books analysed by Google.

I have to say that this is FANTASTIC! Until now this sort of thing has been completely impossible yet now anyone with Web access can get results in seconds. For example the occurrence of the word Glory has declined drastically whereas the occurrence of  police is generally on the rise. Lust has declined gradually and is now into something of a plateau whereas sex is on the rise despite a brief dip in the 90s. – Ooh Mrs!

These may be frivolous examples but sociologists must love this tool. One interesting finding, though counter intuitive, is that the occurrence of the word terror has been declining for 200 years.

Lastly it is satisfying that the phrase Talking Bollocks began a steep increase in popularity in the 1990s though this  dipped around the year 2000. Surprising as New Labour did not get evicted until 2010.