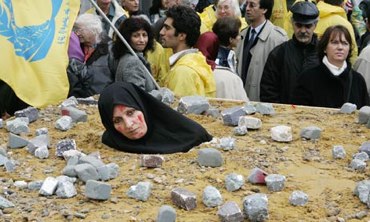 An Iranian woman has been sentenced to death by stoning, the first such sentence this year. Help save Sakineh and end the horrendous practice of stoning – sign the petition against this.

Also check out the Iran Solidarity web site which was formed to mobilise support and stand with the people of Iran against the Islamic regime of Iran.

And here is the president of Iran. The buffoon who condones this practice. It’s odd but in most pictures of him his head appears to be inflating like a balloon. Let’s see if we can help that ballooning process along a little bit. There we go. Maybe his head is full of silly ideas and one day soon his silly balloon head will explode!