A friend of mine claims that he has gone to work for The British Antarctica Survey. This may be true but I have not yet ruled out that he is sitting on a beach in Thailand sending me Emails. However, in a spirit of trust, I intend to publish his reports here and this is first detailed account of his arrival – Jonesxxx

After a few days in Cape town we are told that our flight on the Russian transport plane is to be brought forward due to bad weather in Antarctica – they need to get us in and out of the way asap.

The briefing for the flight is interesting – the plane has no windows and is set up for military use.There is a glass nose cone on the front identical to the ones you see in old war movies – they have set a web cam up that films the view from here and you are able to go up during the flight to look out the window!

We land at Novo air head ( a blue ice runway on the ice shelf) about 20km from the main base where we unload our equipment and wait for transport skidoos to move it to the main base. In between this we are taken to one of the mess tents where we grab hot drinks and food.The runway is literally blue ice and is 3km long; it serves as a consortium base for a number of the Antarctica treaty countries and is run by the Russians and the Antarctic Logistics Company International (ALCI).

You get great views across the shelf with Nunatacs piercing the shelf in the distance – these are the tops of mountains that are covered by the continental ice sheet and are thousands of metres high yet only a few hundred metres are visible.

We are told that we will not be flying out of here to Halley due to weather and rather than sleep in tents we are moved to Novo base itself. This journey is done in an old Russian tank like passenger vehicle and takes about 30 minutes.

Novo is set on the edge of the continent where the ice sheet has retreated and rock and mountains are visible. All 18 of us are housed in a new timber bunk room which they use in these instances. It does not feel very Antarctic and there is even a sauna (although coincidentally it is not in use at the moment!).

We spend the next few days exploring the base and surrounding area and walk in most directions including down to the sea ice and pressure ridge area. We see fantastic ice structures caused by the tidal and wave movements as they come up against the shore.

The food on the base is pretty poor and is survival food – the Russians see eating as a means of keeping the body sustained and not for enjoyment! At meal times we congregate in the mess area and watch Russian sit-coms and game shows and some of the guys play table tennis. The temperature varies from -5 to -7 and is not too cold except when the wind blows.

We are stuck here for a number of days waiting for the weather to break – bad weather here is essentially high and winds and poor contrast – it does not snow much (only 1.5m annually). On one of the days we are invited to the Indian base (Maitri) which is only 5 km away and so we take a trip out there and are shown around the base – they have built a wonderful conservatory and have a small multi faith temple in the roof space!

After a few days here we are told we will be flying tomorrow and are moved back up to the air head – we are a little dubious of this as we have heard that the first commercial flight will be arriving tomorrow and accommodation is required for the pilot and air stewardesses – we are sure the sauna will be miraculously working for their stay and that we will be housed in tents!

The air head is very busy that day as it has been effectively shut for 3 days – the Illuetian takes off for fuel drops and a Basler (DC10) lands along with a twin otter and the Boeing 737 with the day trippers. We sneak up to the edge of the runway to see the landings and take off’s and get battered by the jet wash in between. The first person off of the 737 (apart from the blond air stewardess!) is wearing shorts and a T-Shirt. I think they are American….

The Russian base and air head is littered with broken down plant/oil drums/tank tracks and refuse. The complete opposite of what I was expecting. Fuel drums and tanks are unbundled and there is evidence of large oil and diesel contamination where there is a graveyard of old machinery. This area is designated “Irretrievable” and beyond repair.

Our Balser takes off for the 3 hr flight to Troll the Norwegian base where we will refuel before the final 2hrs leg to Halley. Troll is everything you would expect from the continent – the runway is pristine and there is just one vehicle and the fuelling plant. The runway is surrounded by Nunatac and glaciers and looks fantastic. We have an hour stop here. 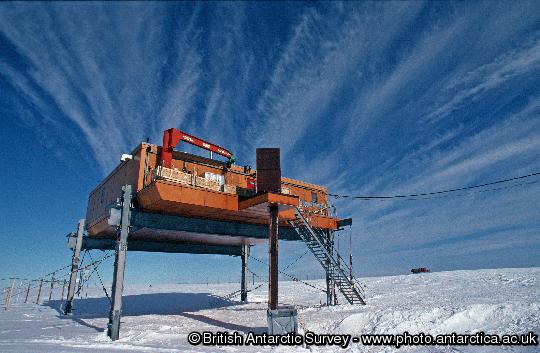 We eventually arrive at Halley and are met by the base team and moved up to the Laws platform. We are allowed to shower for the first time in a week and are fed fantastic food cooked by the resident chefs!
The platform sits on jackable legs above the snow and can sleep 50 people. It has a common room, bar, library and workshops as well as a canteen area. It was built in situ by Christiani and Nielson and is wearing very well.

We are allocated bunk rooms. We have a window which is good but the rooms are not spacious. One of our first projects will be to build an accommodation annex for some of the construction team to move into which will allow us to move into the Drury building. Our team currently is made up of Galliford Try employees and BAS employees. The Galliford lads are working on the new Halley VI project and much of our tasks will be facilitating the smooth operations of this. We are the early input team (normally BAS do not operate here until late December. They then depart end of February). Along with the Laws platform there are the Simpson building, CAS lab, Garage and Drury and annexes.

We are inducted the next day and taught how to operate skidoos and Snow cats. I am teamed up with another guy and we are given a skidoo for the season.

The whole reason for building a new station is that the section of the Brunt ice shelf that the Halley V station is on will eventually break off. The new station will be situated about 30km South of here, still on the shelf but it will be able to be towed on large skis to a new location if required. The Brunt ice shelf moves off the continent itself onto the sea (where we are) and moves out further to the sea until it breaks off. It is approx 200m thick.

My first week has been assisting the construction of the new annex.We work from 0703 hrs to 1930 each day including Saturday. The average temperature is -15 deg and the wind has been strong most of the week. The moisture that we create freezes our overalls and gloves solid and makes things tricky but regular tea breaks help us thaw out. The kit we have is good – very warm boots and inner layers and padded overalls and top layers but this does not make it easy to work in.

My setting out and levelling skills have had to be resurrected and so far everything is in the right place. One of my jobs will be to survey the Bondoo (surrounding snow plains) so that accurate predictions can be made regarding the life span of the Halley V platform.

Because of the annual snow fall everything has to be either moved or jacked up on legs each year. The Laws platform sits on 30m of stilts that are now in cased in ice. Because of the construction of the new base the old base has not been jacked up for a couple of years and there are no extendable legs here at the moment to do so. Snow management is, by far, the most important activity on the base with teams of snow cats/dozers and 360’s. There is £4M worth of plant on site much of it custom built. Every single container needs to be moved each season.

The wind creates wind tails that are effectively large mounds of snow on the leeward side of any structure. Three to six metre tails can be created overnight in a storm and this means that the location of each piece of kit can directly affect another section hence the containers are spaced out at 90 degree to the wind.

Today is Sunday – my first day off and I hope to do some cross country skiing. Saturday night is curry night and we must dress smartly for dinner. We’re allowed 4 cans of beer as opposed the normal 2. So far all good – exhausted from working so hard – no sitting in front of lap top any more but I am sure in a week or so I will be less worn out. We have another intake of staff some time this week and new people to meet.