I find so much that is going on in British politics so reprehensible that it is difficult to keep up.

Tony Blair came to power promising reform of The House of Lords. We thought this meant the introduction of democracy but Blair rigged the system so that the incumbent party could pack the Lords out with their mates.

It’s worth considering here that, though hereditary peers are not democratically elected, they are, at least,  independent of the executive. The abolition of hereditary peers and the expansion of Life Peers meant that this independence was removed without any compensating democratic accountability. So the promised reform of The House of Lords was merely New Labour spin.

Now that New Labour have run into trouble, democratically elected MPs are deserting Gordon Brown. He has reacted to this by rushing through membership of The House of Lords for his mates and making them Life Peers. He does this so that they can become members of his cabinet because no elected MPs worth their salt are interested.

By doing this Brown shows that he can rival Blair in his brazen contempt for democracy and cynical manipulation of the system.

On a lighter note, many in the media are saying that Gordon Brown has attempted to draw a line under the current spate of resignations. It seems to me that Gordon spends most of his time drawing lines under disasters.

On the appointment of Sir Alan Sugar as ‘enterprise tsar’):

“Words almost fail me. One can only imagine that Gordon hopes this will distract attention from all the other things…..Sir Alan Sugar is a television personality with a mixed business record. Other than that he has a weak relationship with business. This appears to be a straightforward publicity stunt.“

On being asked whether he had been offered a government job:

“It’s none of your business.“ 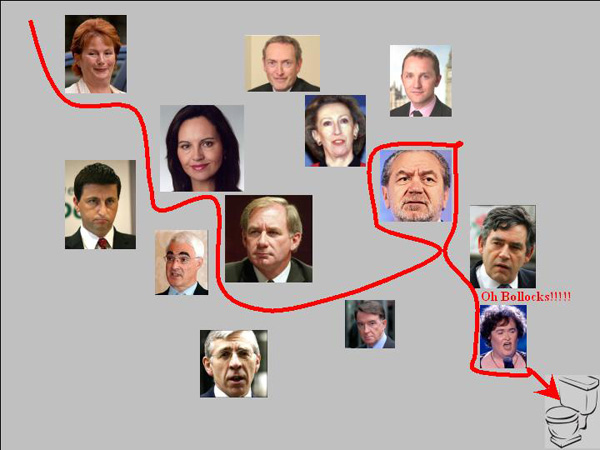